The portrait is of my brother Emmett. I shot it on a recent trip back to our home town of Dublin in Ireland. It captures his wit, caustic humour and his unnerving eye for detail. I shot the photo on my iPhone and then imported the image into Snapseed for general preparation – details, selective adjust, etc. I saved this version to my phone’s Photo Library. I reimported the saved image into Snapseed to add a HD feel with the Drama tool. Saved this version as well. Opened the Blender app and merged the original and HD version to give details a density, depth and contrast that the original image lacked. Back into the Snapseed app to play with the DOP – by using the round tilt-shift tool on the face area to give a shallow depth of field. Saved and then opened in the Pic Grunger app to give the portrait a slight weathered texture. The resultant saved image was opened in the Film Lab app to turn it into a B&W version. I decided on Split Tone – Dark Makara which gave the portrait a lovely warm vintage feel. ‘Da Brudder’ was pleased with the final result. 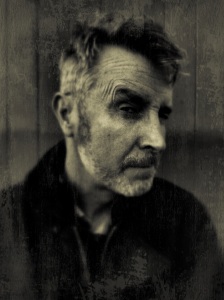